XXIst century is a photographic experiment, based on a simple statement; people´s mentality does not change easily.

The project was performed at the beginning of the XXIst century in the city of Madrid.

A series of people and/or couples were naturally located in different neighbourhoods. Doing natural things, such us talking, reading a newspaper, hugging each other.

Some of them were naked, some others were non conventional spanish couples. For example, a black male and a white female, a man older than a woman, two girls, etc

The project was also a documentary. Camera equipment used was discrete and non professional in order to be invisible to the public. 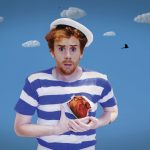